Growing cover crops after corn can be a real challenge. Waiting until after corn harvest to seed cover crops restricts the usable cover crop species to winter cereal grains (rye, wheat, triticale). Very little cover crop growth is expected in the fall when planting after corn grain harvest, which leads to slow growth in the spring as well. To improve cover crop performance after corn, a number of farmers and researchers (including us at the W.K. Kellogg Farm) across the country have been working on strategies to inter-seed cover crops during the corn growing season. These methods get the cover crop established earlier for more growth potential and grazing opportunities, and expand options for species selection, but inter-seeding cover crops is not without its share of challenges. Here’s what I’ve learned over the past few years.

When we talk about using an airplane to seed cover crops in corn, we are usually considering a late summer or early fall seeding, as the corn is beginning to show signs of maturing. The cost of hiring someone to apply these cover crops on your fields can be very competitive with drilling the cover crop yourself, but the cost does depend on how far you are located from an airport. 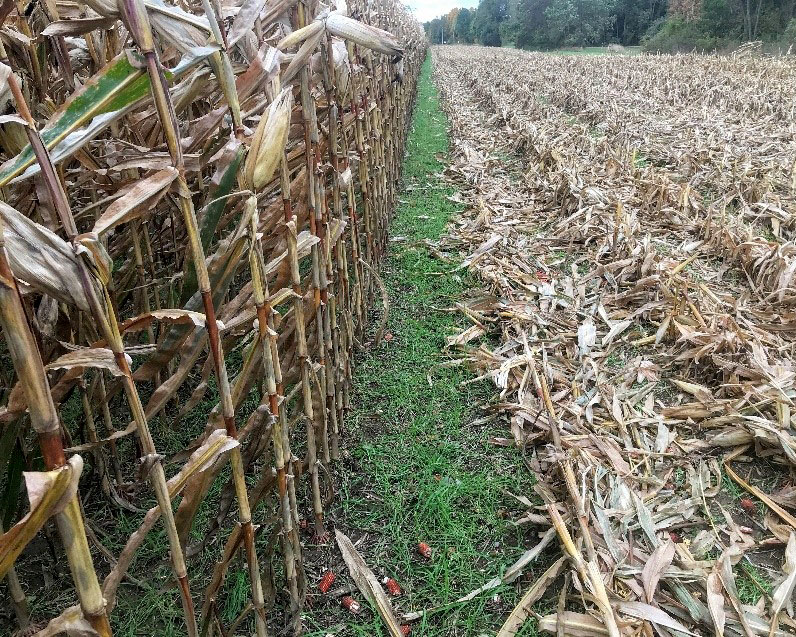 The species of cover crops typically used are cereal rye, annual ryegrass, hairy vetch or crimson clover. Other winter cereal grains can be used, but cereal rye and annual ryegrass seem particularly suited to germinating on the soil surface Pictured here are cereal rye and a small amount of hairy vetch that were aerially seeded into corn in early September at 80 lbs. per acre; the photo was taken in late October at harvest time.

Cereal rye is commonly seeded around 60 lbs. per acre, and annual ryegrass around 20 lbs. per acre. Hairy vetch and crimson clover rates should be adjusted based on the following crops’ nitrogen needs. These legume seeds are more expensive, so lower rates (under 10 lbs. per acre) are ideal if you don’t need the nitrogen fixation benefits. Herbicides applied to corn can be a factor, but are generally not a concern for cereal rye cover crops seeded in September.

Early inter-seeding of cover crops into corn typically refers to planting the cover crop between the corn rows during the early phases of corn growth. This is often at the same time as the last cultivation in organic fields, or at the time of herbicide and side-dress nitrogen application in conventional farms. This timing works well because we can still drive our normal tractors and implements through the field without damaging the corn. We’ve seeded cover crops anywhere from the V3 to V7 stage, with successes and failures across the range, including:

Corn rows: To widen or not to widen? 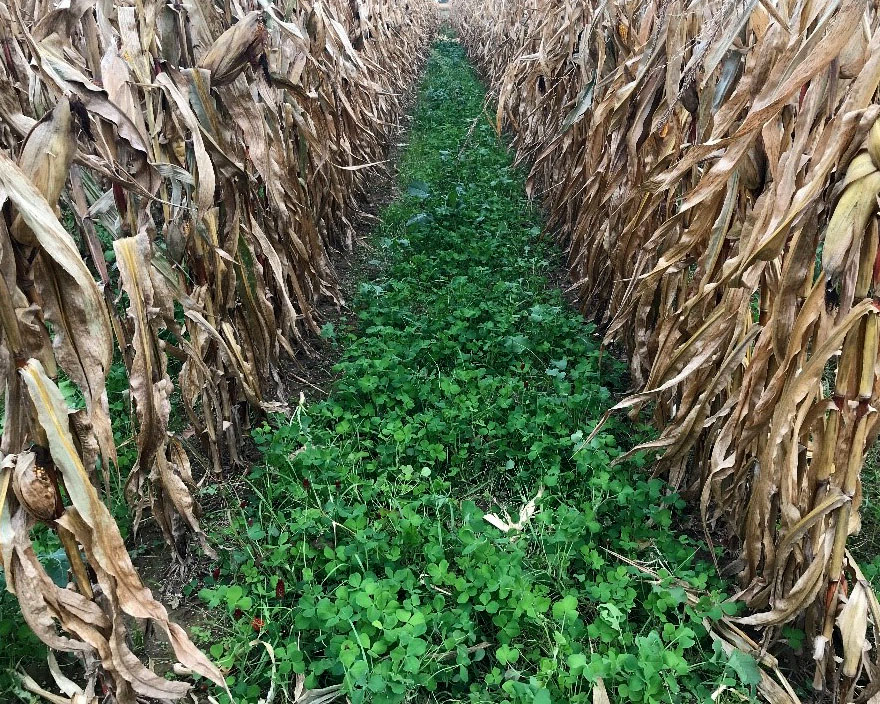 Several farmers across the country have been trying wider corn rows (i.e., 60” between rows) to improve early inter-seeded cover crop establishment and growth. We decided to try this in 2019 at the Kellogg Farm in an experiment, primarily to test the effect on corn yields. When compared to 30” row spacing, keeping the total plant population per acre constant, corn planted in 60” rows yielded 8.5% lower (147.5 bu/A to 135 bu/A). The cover crop established in both row widths but cover crop biomass was greater in the 60” row corn plots.

More years of testing are needed to confirm these results, and we are considering testing some other management techniques that might narrow the corn yield gap, such as banding side-dress nitrogen next to the 60” corn row and trying different corn varieties. The wider row widths may also create opportunities for side-dressing manure during the corn growing season due to the wider driving path between rows.

We’ve found that we don’t have to wait until the corn is harvested to get cover crops established. Hopefully, the successes and failures we’ve experienced in our trials at the Kellogg Farm can improve the chances of success on your farm. 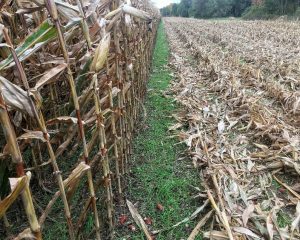 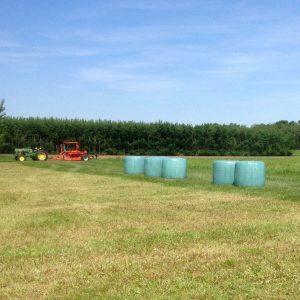 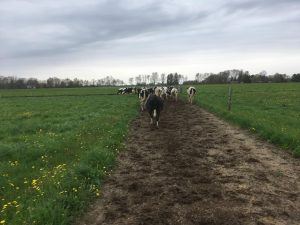